Jorge Masvidal is not clamoring for a grudge match with Colby Covington. The 11 of July, … 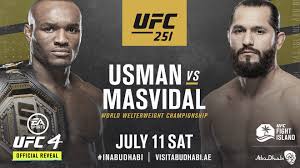 Kamaru Usman put his welterweight title on the line against Jorge Masvidal in the lead ...

Six days ago, the star of the first event on the brand new Fight Island in Abu Dhabi was…